You are here: Home / About Myanmar

Myanmar is a country made up of people from many different ethnicities and religions. For over fifty years Myanmar was ruled by a military dictatorship.

Elections in November 2015 brought an end to direct military rule and Myanmar was ruled by a government led by the National League for Democracy (NLD), although the military remained outside the control of the government, operating independently and with significant powers under the 2008 Constitution, which it drafted. Some parts of the country remain under the control of armed organisations made up of different ethnic groups.

The NLD won another landslide election victory in November 2020. On 1 February 2021, the day the new government was due to take office, the military staged a coup and returned the country to military dictatorship. 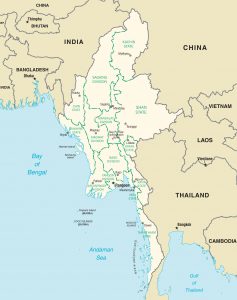 Since Myanmar regained its independence from British colonial rule in 1948, successive central governments, dominated by members of the largest ethnic and religious group in the country, Burman Buddhists, have tried to impose their ideology of Burma as a Burman Buddhist country.

This has compounded the mistrust many ethnic people have of the majority Burman ethnic group, due to a history or repression and discrimination against ethnic people by Burmese Kings before colonial times.

Since independence, Myanmar has suffered from multiple conflicts mostly along ethnic lines, as ethnic groups took up arms in response to repression and what they saw as threats to their freedom of religion and the survival of their race.

In 1962, when the democratically elected government led by U Nu proposed talks with some ethnic groups regarding past promises of more autonomy for ethnic regions, the military launched a coup on the grounds of defending national unity. Anyone who criticised the military faced arrest, torture and long periods in jail. Media was censored and there was no freedom of expression.

Ethnic groups in particular faced severe repression under military rule, with the military stepping up attacks and other forms of discrimination.

During this time there were many military operations which resulted in thousands of deaths and thousands of people being displaced.

Elections in 1990, which the main opposition party, the National League for Democracy, won by a landslide, were not respected by the military, and they refused to hand over power.

Domestic and international pressure finally forced the military to step back from direct and overt rule. Instead they used a new 2008 Constitution to secure their ongoing control over matters of security and police, and their independence, whilst allowing a civilian led government control over areas such as health, education, agriculture and the economy. A guaranteed 25 percent of seats in Parliament enables the military to block any attempts to change the constitution.

In 2015 the National League for Democracy (NLD) won a landslide victory in elections, and formed a government, sharing power with the military, in April 2016.

The NLD won another election landslide in November 2020. After the huge defeat of the military political party, the USDP, the military began making unsubstantiated claims of widespread voter fraud by the NLD.

On 1 February 2021, the day when the newly elected MPs were due to convene to choose the President, the military in Myanmar staged a coup. The military, led by Min Aung Hlaing, arrested many political leaders and human rights activists, including Aung San Suu Kyi and President Win Myint, in night time raids.

The military declared a state of emergency, and said new elections would be held only after a series of conditions have been met, including an investigation into electoral fraud and economic recovery from the COVID pandemic.

Millions of people across the country have protested against the coup, effectively stopping the military seizing full control of the country.

The military launched a brutal crackdown in an attempt to crush resistance to the coup. Since the coup, security forces have killed over 2,000 civilians, detained over 15,000 and displaced over 1,000,000 people, mainly ethnic civilians.

Subscribe to our free newsletter and keep up to date with the latest news.

We will not share your email address with any other organisation.